Tuckerization in Incident at a Japanese Inn

Tuckerization is the practice of incorporating one's friends into an existing work as either a favor or as a friendly jest. Sometimes, only their names are used and sometimes their characteristics are used to flesh out a character.

In my work in progress, Incident At a Japanese Inn, the third part of The Shrine War, the Tsuta Ryokan that serves as my Japanese Guest House, is operated by a rakshasha, a mythological creature from India that in my story comes in the shape of an anthropomorphic hookah-smoking tiger.

He is based on my friend, Dave Hill, whose Internet persona from the first day I met him years ago was a scuba-diving tiger. And after a little bit of research, I discovered Dave's name in Japanese is Oka Debiddo. I hope he enjoys his little inclusion into my fanciful tale as, in my humble opinion, I think Dave would make a wonderful proprietor.

Needless to say, all rights are reserved on the segment that follows and it is to be considered a rough draft. The final entry may be dramatically changed:

The tiger smiled behind the counter, sprawled on his stool. The creature then put the stem of the hookah to his lips and set it bubbling as he inhaled a deep breath. Smiling, the smoke trickled out from between his jaws and ascended to join the existing haze at the ceiling.

“You are not yōkai, sir,” Christopher asked, his voice faintly quavering. “May I ask your origin?”

The tiger lazily leaned forward, his face uncomfortably close to Christopher. “No, I am not yōkai. I am rakshasha, from India.”

“I regret I am not familiar with your kind,” Christopher said, hoping his courtesy would pacify any ire caused by his curiosity. “India is a far cry from Japan.”

Oka sat back on his stool and took another languorous puff from his hookah. “I was found many years ago when a cub by a Buddhist monk named Vasubandhu. As I was living proof of the reality of his worldview, he took me in and raised me almost as if I was his natural son. And we toured through India, Tibet, China, and Korea spreading the wisdom of Gautama Buddha. We eventually ended up in Nippon."

“And when was that?”

The tiger puffed thoughtfully on his pipe allowing more smoke to wreath his striped face. “I have not thought of that for awhile. When you are immortal, one loses oneself in the current of time.” He drummed his claws on the counter. “I think it would have been at least one thousand, six hundred years ago. And when my adopted father passed I became the proprietor of the Tsuta Ryokan.”

Christopher felt relief at the creature’s expressed amiable feelings toward its human master and allowed himself to relax. “So,” Christopher asked, “as an immortal, do you ever miss your father?”

The rakshasha shook his head and patted his stomach while grinning voraciously. “I assure you, I carry Vasubandhu with me wherever I go.”

Email ThisBlogThis!Share to TwitterShare to FacebookShare to Pinterest
Labels: Incident at a Japanese Inn, story excerpt, The Shrine War

Incident at a Japanese Inn: An Introduction

Now that the rough draft of The Inugami is complete, as I edit it, I am already doing research for the next section of my braided novel.

Incident at a Japanese Inn takes place inside the walls of the Tsuta Ryokan, a Japanese guest house made by yōkai for yōkai. In the first two sections of the novel, The Shrine War and The Inugami, I introduce the reader to only two types of Japan's hundreds of yōkai: Kitsune (illusion-casting anthropomorphic foxes) and Inugami (anthropomorphic canine slaves created by a dark and evil Daoist sorcery). I also very briefly introduced two onis, generic Japanese dæmons.

In An Incident at a Japanese Inn I am opening my literary universe to a number of yōkai races:
Unfortunately, Japanese folklore only contains a very few of actual races. the vast majority of yōkai are singular entities restricted to a very specific locale such as a city gate or a specific river, so I may take my liberty as a writer and make up a yōkai of my very own.

As always, stay tuned. The adventure will be a lot of fun.
Posted by Alan Loewen at Thursday, January 18, 2018 No comments:

Email ThisBlogThis!Share to TwitterShare to FacebookShare to Pinterest
Labels: Incident at a Japanese Inn, The Inugami, The Shrine War

Odd Tales of Wonder #7 Is Released! 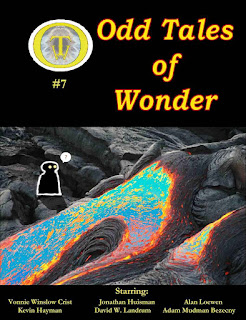 From the editors of Odd Tales of Wonder:

Why am I excited about this? Because it contains my story, Through the Black Andes, a fantasy tale based on a real location in south-central Pennsylvania:

Also, once again, I appear in a magazine next to Vonnie Winslow Crist. We've got to stop seeing each other like this! ;-)

Here is an excerpt from Through the Black Andes and though the story is fantasy, these three paragraphs are based on historical fact:

The name Black Andes was first given to this primordial stand of pine and from its first discovery, hunters and charcoal makers made every excuse to avoid the area. Birds never called out or sang there. Game avoided the area.

On cool autumn nights, the men of Big Flat would let their dogs run loose to harass the local wildlife. As they told tales and drank bootleg whiskey around a fire, they would listen to the baying of their hounds. Each hunting dog had its distinct voice and they would listen to the baying of the hounds content to follow the chase from the intensity of the cries and the direction from which they came. Occasionally, the hounds would tree a cougar, bear, or raccoon and—if the spirit moved—the men would leave the fellowship and warmth of the fire for meat and fur.

However, the hunters quickly learned to steer their nightly activities well away from the Black Andes. Any hound foolish enough to pursue game into the sanctity of the pines would simply never return. And no hunter ever found the bravery to plunge into the eternal darkness of the stand to discover the fate of their animal.

Posted by Alan Loewen at Wednesday, January 10, 2018 No comments:

Part Three of The Shrine War to Begin Soon!

On Saturday, January 6th, I wrote the words, THE END, on the completed rough draft of The Inugami.

At 12,970 words, The Inugami is only 970 words longer than The Shrine War, but together the two novellas make up one complete novel in word length.

And I'm not done yet. The third part has yet to be written.

Incident at a Japanese Inn will begin shortly, but not until I have completed reading Oliver Statler's 1961 work, Japanese Inn, his love song to the history of the Minaguchi-ya, an ancient inn once located in the city of Okitsu.

In the former stories, I focused solely on kitsune and inugami, two types of yōkai from the folklore and mythology of Japan. The third story takes place in a mythical inn that I have named Tsuta Ryokan, a Japanese guest house that is operated by yōkai for other yōkai. And as there are thousands of different types of yōkai, I am letting my imagination run wild.

Stick with me. It's going to be an incredible ride.

The book cover is adapted from a woodblock print by Japanese artist Toyohara Chikanobu  (1838–1912) and is in the public domain.
Posted by Alan Loewen at Wednesday, January 10, 2018 No comments:

Email ThisBlogThis!Share to TwitterShare to FacebookShare to Pinterest
Labels: Incident at a Japanese Inn, The Inugami, The Shrine War

Cats In Space: A Review 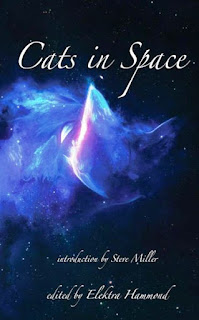 Cats in Space is an anthology of seven short stories about, as the title makes very clear, cats in space. Of course, though some might be typical cats (C. L. Holland’s Miss Davenport’s Ugly Cat), others are aliens in feline form (Star Born, Star Bound, by Dantzel Cherry and Distant Cousins, by Jody Lynn Nye), genetically engineered cats (Beth Cato’s Headspace), and other intriguing variations. The atmosphere of the stories range from the humorous (Phase Change, by Joy Kennedy-O’Neill) to the tragic (A Slow Constant Path, by Erica L. Satifka) and even to the horrific (Leona R. Wisoker’s faint nod to John Carpenter’s The Thing in her story, Leftovers).

Cat lovers will find many a satisfying tale about our feline friends in futuristic fantasies. With only 93 pages, it can easily satisfy an evening’s literary demands.

Returning to the World of the Inugami

I have left The Inugami for too long and now on the opening of a new year, I am determined to complete the first rough draft in the next two weeks. I wisely allowed familial and vocational responsibilities to interrupt my writing schedule, but it is time to return to the adventures of Shadō and Kelly and their quick descent into tragedy as two different worlds come into conflict.

For my new readers, The Inugami is the second story in The Shrine War braided novel. The first section, named after the title of the work, is completed and a truncated version has been published in Fred Patten's wonderful anthology, The Dogs of War. In my mind, I wrestle with the third and final part of the work, Incident at a Japanese Inn.

What follows is a rough draft and may be radically different from the finished project. Please forgive errors and typos. It is, after all, a rough draft. Needless to say, all rights are reserved.

That afternoon, Kelly returned to her apartment to find Shadō practicing with her sheathed sword in the living room. Shadō had moved the furniture back against the walls and had dressed herself in the clothing that was in the buried box of her former master.

Shadō had bound her chest with a large strip of cloth. Dimly, Kelly remembered it was called a sarashi worn by Japanese swordfighters of both sexes. The only other articles of clothing was a floor-length skirt with slits up both sides almost to the waist and a heavy sash that served as a belt. A slit in the back of the skirt allowed the Inugami’s white-furred tail to move freely. Kelly watched with growing respect as Shadō practiced her elaborate kata, an elaborate series of movements, making the sheathed katana hiss through the air.

Shadō made three elaborate moves before sliding the sheathed sword into her belt then turned to face Kelly and bowed low. “Welcome home, master,” Shadō said. “How may I serve?”

Kelly shook her head. “You are not my servant,” she said firmly. “We are equals.”

The Inugami looked up, her eyes betraying her emotion. “In the world of the onmyōji order must be maintained: student and teacher, servant and master. Without order, there is chaos and in chaos there is only destruction. I am no longer hidden and my presence is felt in the worlds seen and unseen. We will have visitors and some will come to challenge.”

Kelly swallowed and placed her backpack on the dining table next to the ancient book of the Daoist sorcerers. It lay open to the page describing the paces of Yu, a shamanic dance that paced the nine stars of the Big Dipper to capture its supernatural strength.

“The world has changed, Shadō,” Kelly said. “The onmyōji belong to the past. They must stay there.”

Shadō sighed with obvious consternation. “You see an Inugami before you. You are aware of the presence of kitsune.” The Inugami came and knelt before Kelly. “The world has not changed. A part of it has simply been hidden and now it bursts forth. Soon you will see other marvels and some will not be friendly. You must prepare.”