Welcome to Worlds of Mystery! 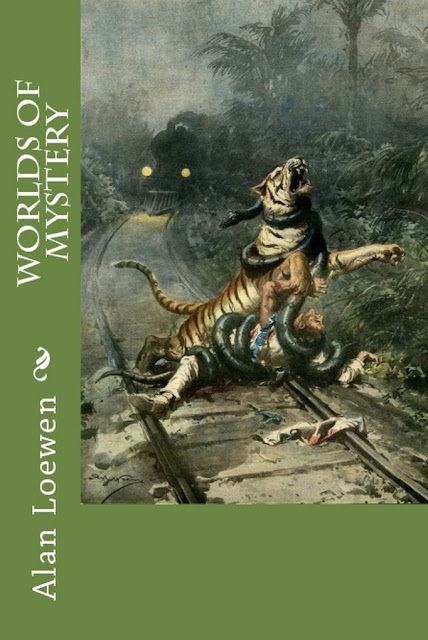 A list of stories and a brief description are located here.

Coming In Time for the New Year 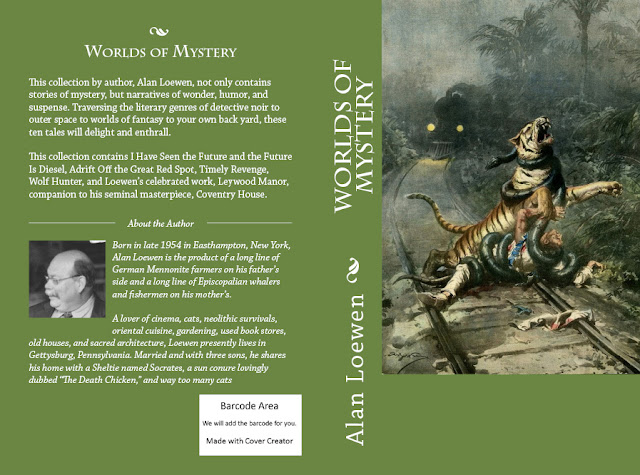 Yes, I honestly thought I'd have this released in time for Christmas, but I have strong standards and kept finding errors. I think the fifth time through the approval process should do the trick and the result is a paperback and an eBook I'm proud of.

I stripped the cost down as far as Amazon would allow me so the paperback is $5.49 and the eBook is around $1.49.

This book is not yet released, but I will announce its Amazon advent within the next five days.

The ten tales are:

Interview With Author A. R. Mitchell

I have had the pleasure of knowing author A.R. Mitchell for some years now and I was one of the original test readers for her work in progress, The Wind Walker. Recently she released a short story collection, Goldlust, that I reviewed here.

This is A.R. Mitchell's story.

I’ve been writing fiction since about fifth grade. Even before then, I was the kid who was never intimidated by the teacher’s threats of, ‘you will have to write a report’. That was easy. Math is difficult. Math is still difficult. If you want me to confess my background like a resume, there’s about twenty writing awards. A good bit of them are from the national Scholastic Art and Writing Awards… and most of those stories do appear in my first short story collection Goldlust. I also have a blog.

2. What genre do you write in?

I tell people I write pulp. Pulp isn’t so much a specific genre as it is an attitude or a style. People tend to think of it as just detective stories – and that’s part of it, but during the 1930s, 1940s, and into the 1950s it was actually a class of literature. The moniker 'pulp' came about because the titles were printed on cheap paper made from tree pulp. It was slightly above comic books, which at that time were considered foolish and only for children, and definitely far below literature. Pulp encompassed action adventure stories, science fiction, sword and sorcery, fantasy and westerns, as well as detective stories and… the last hold over… the cheesy romance novels you find in grocery stores. That’s considered women’s pulp, now renamed ‘chick lit’. I don’t write that. Ever. I would bore myself to death.

3. What drew you to the pulps?

I started reading Raymond Chandler in fifth grade. While my peers were reading the Harry Potter series – I was reading The Big Sleep and Dashiell Hammett’s The Maltese Falcon. Both are listed as a post college reading levels – which destroys a common belief among people that pulps are lower class, predictable and not to be enjoyed and consumed by anyone with an iota of intelligence.

It was actually the women of the pulps which pulled me in. Growing up I was the ‘good girl’ – which is incredibly boring. The wisecracking private eye Phil Marlowe said all the things I couldn’t say, and the women did all the things I couldn’t do. Vivian Sternwood from The Big Sleep is a favorite character of mine. She knows men, she knows how to work with them, and control them using the resources at hand, her money, wits, and looks, yet will work tirelessly to protect her father and her younger sister. She’s flawed and as tough as any of the dystopian fiction heroines we see today. She was also less noble, and a perfect foil for leading smart-mouthed narrator, Phil Marlowe. And I’m also a sucker for a snazzy and sassy turn of phrase coupled with an image which makes me chuckle. You’ll see some of that in my work.

4. You mentioned the 1940s – you are an active World War II reenactor. Does that play a role in your genre and subject matter? What came first?

I’ve always been a history nerd, and it wasn’t long after I started writing in historical time periods that I realized I needed to live my characters in order to understand them. That’s not to say that I get into barfights on a regular basis – but I do learn the experiences of my characters as much as possible… including a trench warfare night battle against the Germans on the Eastern Front, the perils of the French Resistance, and the surprise of rolling over in your 1940s shelter half (a two man tent) and whacking your eyeball on the tent pole.

The writing came first. The reenacting started as research. I had a character who needed paperwork and because it was German identification papers, I couldn’t call them passports. The internet frequently fails me in matters such as this, so I had to go talk to some people. Eventually I fell in with the US 36th Infantry Division, or the Lost Battalion, a unit who’s history I may end up writing about in the future. I’m their representation of the females of the French Resistance, since, unlike the Russians, during the 1940s women were not in the American infantry and generally not on the front lines. Although some of them did have combat roles in the Army Air Corp, nursing and in the Press Corp.

An the best stories come from real life. At a living history event this past year, we had the honor of meeting one of the veterans who had served beside the 36th and actually was part of the unit who rescued the 36th Infantry in the forests of France. He told me, “We had a man from the French Resistance named Jacques, who lead us through the forest. Without him, and the people like you (portray), we could not have rescued the 36th Infantry.”

You can read the full story on my blog here.

My Facebook author page is also full of reenacting events, military history, author updates, and my blog, which is updated every Monday morning. Its more active during the summer months because of reenacting events – but there are plenty of photographs to look over and see what kind of historical events and adventures I’ve had.

I’ve also enjoyed portraying Russian infantry, where women served on the front lines, in all aspects of the Russian military. Red Trouble, which I hope to have published in the coming weeks features one of these women. Here’s a sample without too many spoilers.

5. Back to Goldlust, your short story collection… what is its genesis? 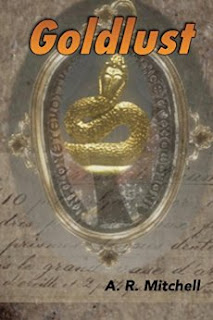 Goldlust is a short story collection. It began in a dry spell of writing with the goal of me seeing what I could put together. My goal this past year was to get published. Goldlust is the fruit of that project. It’s a collection of twenty award-winning stories – and some new ones too. They span the genre gamut – I’ve got science fiction, fantasy, action adventure, dystopia, humor, sword and sorcery, a tad of romance, a western, cop stories, military fiction, and spies.

6. Some of Goldlust’s stories appear to have a nebulous ending. Are you going to expand these stories at any time?

I hope to. There are several characters whom I love dearly, and multiple worlds which I would like to revisit, the dystopia of Armageddon's Grace and The Pursuit Cycle are two of them. Also, if I can, without giving away too many spoilers, you will be seeing more of the 1930s German scientists at the end of the opening action adventure story, Goldlust. The black blood from Remember Me is significant as well. The Angel of Death will return and arms dealer Mason Jaymes from Storms of Life has a habit of walking into loaded situations with that dashing brazen charisma and those stunning bright blue eyes saying, “Honey, you need me.” 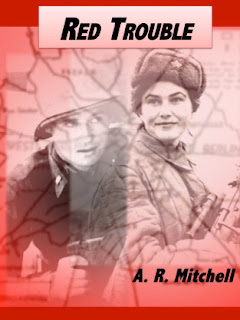 7. You’ve mentioned Red Trouble, and Goldlust, which is available through Amazon.com. Have you any other works in the hopper that we should look forward to?
Yes. I am an author who never rests. Writing is like breathing. After Red Trouble my next project is a novel titled, The Mist Walker. – We’ll start with calling it a novel because in the seven years I’ve been working on it, it’s spiraled into more adventures than I can handle. The Mist Walker is a modern thriller mixed with dark fantasy and international intrigue. It features a detective narrator working with an international terrorism investigation team facing a serial killer who’s straight out of ancient legend. There are also World War II connections, ancient curses, a high body count, lots of gunfire and plenty of suspicious characters. Its like Indiana Jones with the cynical voice of Raymond Chandler meets Xena in the world of Tom Clancy.

I hope to have The Mist Walker edited and published this summer.

Goldlust in paperback can be purchased here.

Goldlust for Kindle can be purchased here.
Posted by Alan Loewen at Wednesday, December 14, 2016 1 comment:

My New WIP: The Inugami 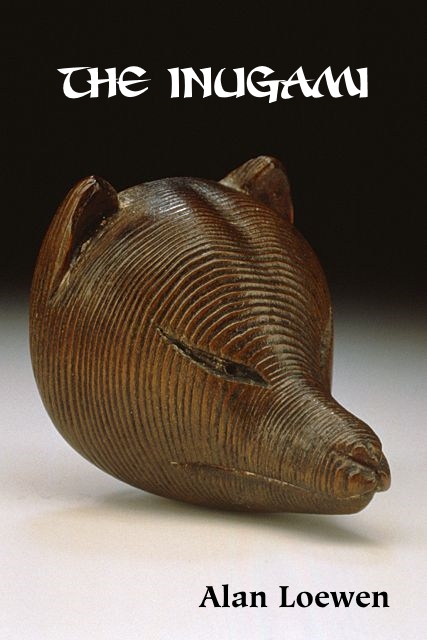 Taking place concurrently with the events in The Shrine War, The Inugami is a tale of a young Japanese woman who rents an old house on the outskirts of Tokyo to discover her new home is already occupied.

An Inugami ("dog god") is a familiar for Japanese sorcerers and was created from a living dog in a process so abhorrent I will not post the process here and I only refer to it obliquely in the stories.

Don't hold your breath for this tale of Japanese yokai. This is my busiest time of the year and I suspect this short story will take a little while to wrap up.
Posted by Alan Loewen at Tuesday, December 13, 2016 No comments:

It is better to light a candle ...

... than to curse the darkness. 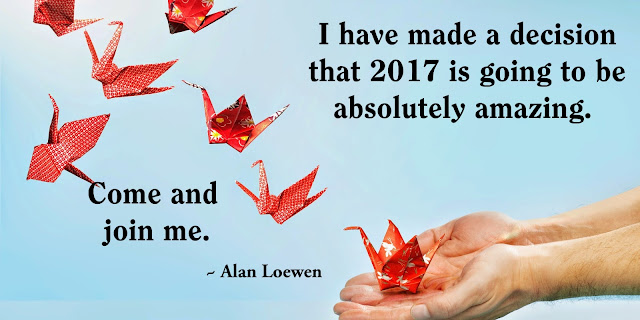 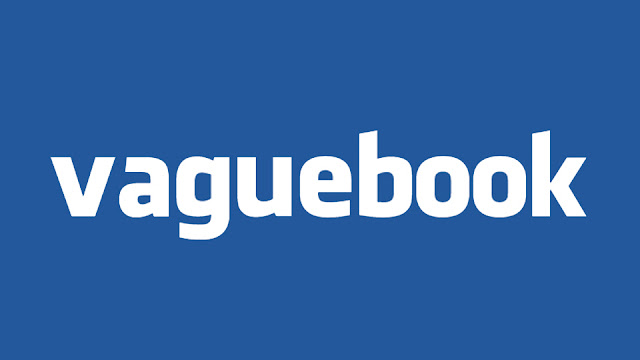 If I was to list just one significant irritation with Facebook, it is what is called “vague-booking,” making a post that is so ambiguous, you know the person who posted it just wants to get attention.

Well, as has been stated before, if you need that much attention, better to get a dog, but I thought to myself, “Hey! Why fight it?”

Ladies and gentlemen, I present to you the Loewen Vaguebook List of Immediate Attention Grabbers. Just post one of these suckers, and you’ll get hundreds of “Wait…what?!?!” from friends, family, as well as being unfriended from sudden enemies. Seriously. Give one of them a try today.
Do remember this is a humor piece. In other words, DON'T ACTUALLY DO THIS.