Somebody asked about my libraries so allow me to take you on a tour.

A confirmed bibliophile since I could first begin to read, I've collected, lost, and gave away more books than I can remember. 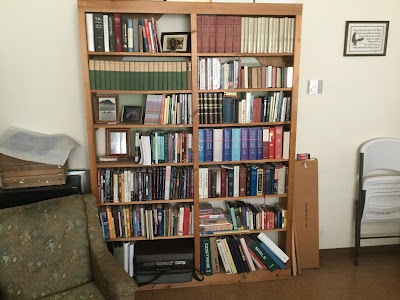 In my office, I have two bookcases, this one handcrafted for me 23 years ago. Consisting mostly of works on theology and ministry, the upper left shelves are dedicated to books about and by Theodore Roosevelt, my personal hero. I may not have appreciated all his politics, but as an individual, his life is certainly to be admired. 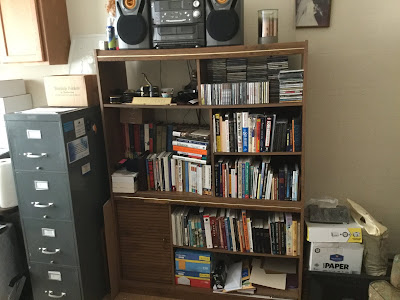 The second bookcase in my office this holds my books on business management, my music CD's, and ephemera that covers a plethora of subjects such as neolithic survivals, books on cults, and works on ancient Britain. 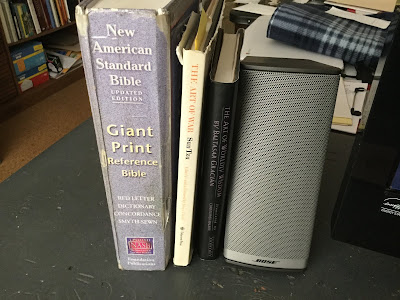 These are the three books that are perpetually on my desk. My goal is to read through each one at least once a year; Sun Tzu's The Art of War, Baltasar Gracián's The Art of Worldly Wisdom, and the New American Standard Bible (Updated). 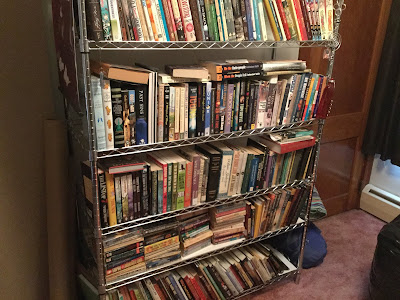 This is my personal bookshelf in my home, and unfortunately, the room is too small for me to back up to capture the entire bookshelf. I would say this contains 95% fiction and the rest containing books to aid in me in my research on my current work in progress. The paperbacks are stacked two deep.

By the bye, this does not take into account books in the storage room, the ebooks on my Kindle eReader or the books stacked up by my bed.
Posted by Alan Loewen at Saturday, August 24, 2019 No comments:

Yes, I Have Been Unusually Quiet.

Allow me to explain:

I can say without superfluous profanity the last four months have been hellish on my family and me with a long bout of personal ill health, four funerals, a sick wife, the protracted death of my beloved dog, and all culminating in the passing of my father.

Needless to say, my nights are consumed by incessant anxiety dreams, several of which contain scenes that will appear altered in future stories. (May as well use them.)

Last night I dreamt I traveled to one of the eastern Asian countries and had an interesting conversation as I passed through customs:

"We have come here to study your country's magnificent volcanoes."
"Ah, yes. Many scientists come. The last one was consumed by a herd of rabbits."
"But ... but rabbits don't eat flesh."
"These ones did."

Now I confess even though I was inspired to get out of bed and write the conversation down immediately, it's a little too silly to use in a story, but the concept is perfect for a horror story: a nonchalant speaker revealing a horrific truth. I could use the idea in so many ways, even in stories that are not specifically horror:

"The coroner says the woman was killed by her Shih Tzu."
"What! But that's just a little dog!"
My partner shrugged. "It's still descended from wolves."

Just an idea. Use it if it works.
Posted by Alan Loewen at Saturday, August 17, 2019 No comments: