I own a personal Facebook page and as some use their personal accounts to bemoan their lot in life, I use mine to practice writing humor. What follows are two posts written during the blizzards of 2015 and 2016. Be aware I have a tendency to exaggerate a little. 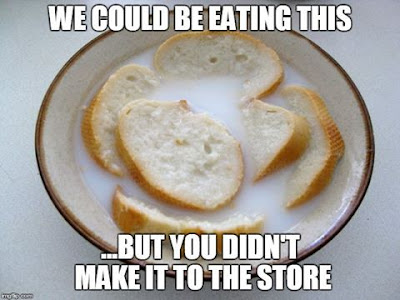 I made a huge mistake yesterday by shopping at the local supermarket when the forecast called for snow. The place was packed with people struggling to buy enough toilet paper, milk and other staples to last them the next three months.

While I was looking at green onions, one woman stopped me and said, “Please sir. May I have that last tomato? My children are starving. They’re all orphans you know.”

Blinking in confusion I assured her she could have the last tomato, but I did tell her that what she was pointing at was actually a coconut. Grabbing her loot, she turned to the next man and pointed at a turnip and begging him for the “last apple” and going on about her orphaned children.

The next aisle was where they kept the cereal and as it was filled with about 100 people reenacting The Hunger Games. I just kept moving.

The next aisle had reverted to trench warfare, air raid sirens, tins of canned meat being hurled across no man’s land, and somebody screaming for a medic.

Quickly pushing my cart to the dairy aisle, I simply stared in shock and horror. I cannot bear to put down in words what I saw, but what you’re imagining now? It was infinitely worse. In panic, I abandoned my cart and fled for the exit.

Making my way to the parking lot, a woman in front of me and carrying at least 20 plastic bags of groceries was unaware of the rutabaga that had bounced out and rolled to my feet.

The little old lady from the vegetable aisle miraculously appeared plucking at my coat sleeve. “Good sir,” she asked in that wheedling voice. “May I have that orange? I have dozens of orphaned children.”

I picked up the rutabaga, looked her straight in the eye and without hesitation said, “No.”

Now I am home where my family enjoys cabinets that were already filled with goods as well as a well-stocked refrigerator and freezer already filled even before the news of snow. And though we could feast like royalty, just for spite, for lunch today we shall all feast on one well-steamed rutabaga.

Having been trapped inside our house since Friday evening, my son, Jared, and I braved the aftermath of the storm and decided to make the mile long hike to the new Rutter's Convenience Store at the Rt. 15 Exit.

Battling our way through packs of hungry, snow blind coyotes and neighbors crazed with cabin fever, we reached our objective armed only with Jared's 8-dollar pocket knife and our indomitable spirits.

Unfortunately, Rutter's was overrun with people raiding the store for milk and bread as everybody knows the only sustenance that can get you through a blizzard is milk-soaked bread or, barring that, milk-soaked toilet paper.

Jared has left me behind as he does not want to be saddled with a crippled old man who moves at the speed of molasses in January. So here I sit in Rutter's cafe typing out this final missive before making the long, dangerous trek home.

If you hear nothing more of me, I'm coyote kibble.

Would You Dare To Go Inside? 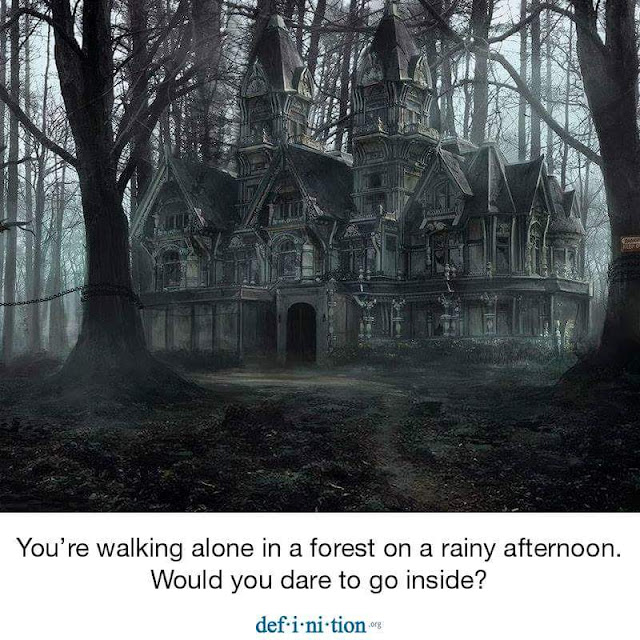 Ignoring old Hollywood cliches, I would, with great delight, stride through the door, grab whatever awaited me by the throat and whisper two little words:
"I'm home."

The Inugami: The Opening Scene

Events in The Inugami run concurrently with the events in The Shrine War. In The Inugami, American Kelly Robbins moves to Tokyo for language studies at the University. Renting an apartment in the Motoyawata neighborhood, she discovers the crawlspace is inhabited by an unfriendly Inugami, a yokai in the form of an anthropomorphic dog left behind by a previous resident, an evil Taoist sorcerer.

What follows is a very rough draft and may be radically different from the finished story.


The Inugami
by Alan Loewen
ALL RIGHTS RESERVED


Kelly nodded at the real estate agent who held the front door open for her. Carefully removing her shoes as was the Japanese custom, she wrinkled her nose at the the smell of an old house unused. Underneath the aroma of mold, came the smell of something else, like a faulty sewer line.

The Japanese real estate agent was a bubbly personality and immediately launched into her spiel. “The house has been on the market for some time,” she said, “but I think it would be perfect for you.”

Suddenly, as if on cue, the house vibrated with the roar overhead of a jet engine as it came in low over the roof. The agent smiled nervously. “It is located closely to the Narita International Airport so you won’t have to travel far when you revisit the United States, yes?”

Kelly smiled back. “I lived under the flight path of the Charlotteville-Albermarle Airport,” she said calmly. “It will be just like home.” Kelly kept her face expressionless, wanting to laugh at the sudden look of relief on the agent’s face. “And the Metro?”

Once again, the agent slipped into her programmed sales pitch. “Just eight minutes away with a brisk walk,” she said. “The Tozai line will connect you to the Chiyoda line and you can walk to the University from either the Nezu or Yoshima stations.”

The agent gracefully slid open a door to show a large, furnished living room. “There is also an eat-in kitchen, a combination bedroom and study and the bathroom has a shower.” She wrinkled her nose. “With a little airing out it will be perfect for you and at 70,000 yen a month, it’s very affordable.”

Kelly looked around the spacious room. It was not that she was going to be spending a lot of her time here. Her responsibilities at the University as well as her studies basically meant she just needed a place to sleep and eat breakfast and dinner. “Is the upstairs apartment rented? Are there neighbors?”

“No, the upstairs needs to be refurbished, but the workmen only come during the day when you will most likely be at school.” The smile never left the agent’s face. “Motoyawata is a quiet neighborhood.”

The Best of the Best

I've been enjoying my blog for almost two years now so here are links to what I consider the best of the best.

Enjoy and thank you for letting me entertain you.

First, four samples of sophomoric humor at its best:
And finally, three observations that sometimes causes me to pause and wonder if I am writing dark fantasy fiction or simply reporting reality:

"No problem. I always enjoy your visits, and my goodness, the time surely has flown. Well, you know the old cliché about time flying when you are having fun."

"Yes, yes. Nonetheless, thank you so much for the trip down memory lane. We have had some adventures together."

"Quite. Quite. I'll still never forget the time you almost destroyed New York City with that warp bomb. That was quite a challenge."

"Oh, come, come. You're flattering me now. I'm convinced you had that under control from the first moment."

"We'll, let me tell you a secret, my old friend. You really had me worried there for awhile. That genetically mutated pit bull that you had guarding the thing gave me quite a nasty turn."

"Really? You're not just kidding me now? That big mutt actually gave you a run for the money?"

"Yes, he did, and I don't want to see that posted to the Internet. In fact, let me tell you the truth. Of all the bad guys I fought in my 40 years in the superhero biz, you were always the most challenging. Whenever, the police called me and told me Doom Storm was on the loose, I knew I was in for a fight."

"That is so kind of you to say. And since we're reminiscing, I'll tell you that whenever I heard it was the Grey Ghost hot on my trail, I confess I felt sort of proud."

"And now here we both sit in a nursing home. Being in this wheelchair, I couldn't chase you now if my life depended on it."

"And I wouldn't get very far with this walker, but I hope you don't mind if I leave you a parting gift. I put a bomb under your seat."

"Well, if I don't see you in the cafeteria, I'll know you failed, and I got the final say."

"And if I do defuse it, I get your dessert."