An Early Christmas Gift: The King in Yellow

This afternoon, I received a package from an old friend I have not seen in many, many years. In the package was a figurine that I recognized immediately:

He mentioned the establishment of the Dynasty in Carcosa, the lakes which connected Hastur, Aldebaran and the mystery of the Hyades. He spoke of Cassilda and Camilla, and sounded the cloudy depths of Demhe, and the Lake of Hali. "The scolloped tatters of the King in Yellow must hide Yhtill forever," he muttered, but I do not believe Vance heard him. Then by degrees he led Vance along the ramifications of the Imperial family, to Uoht and Thale, from Naotalba and Phantom of Truth, to Aldones, and then tossing aside his manuscript and notes, he began the wonderful story of the Last King. (from The Repairer of Reputations, by Robert W. Chambers)


First made famous by the stories of horror writer, Robert W. Chambers, numerous authors have attempted to build on the legend of this horrific entity that rules over the demonic city of Carcosa, somewhere near the star Aldebaran. I myself have tried to tackle a King in Yellow tale, but I lack the gift and it will never see light of day.

Along the shore the cloud waves break,
The twin suns sink behind the lake,
The shadows lengthen
In Carcosa.

Strange is the night where black stars rise,
And strange moons circle through the skies
But stranger still is
Lost Carcosa.

Songs that the Hyades shall sing,
Where flap the tatters of the King,
Must die unheard in
Dim Carcosa.

Song of my soul, my voice is dead;
Die thou, unsung, as tears unshed
Shall dry and die in
Lost Carcosa.

Thank you, John. I may go gibbering mad, but it's still the coolest Christmas gift I've gotten in a long, long time.
Posted by Alan Loewen at Wednesday, November 29, 2017 1 comment:

The Most Common Cause of Death Among Literary Characters 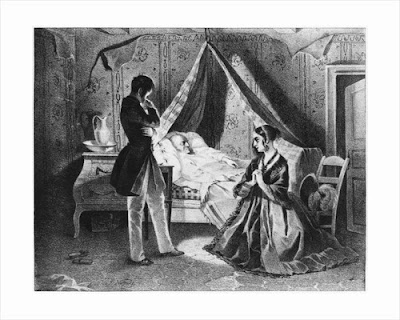 Polly’s mother lay small and still underneath the covers of the bed. The bedroom was dark and stuffy and smelled of mold. Aside from the ticking of an old clock, the only other sound was her mother’s wheezing breaths. Beside her stood the old village doctor, taking the elderly woman’s pulse. Polly tried hard to control her tears.

With a smile, the doctor patted the sick woman’s hand and said some pointless words of comfort. With a nod of his head, he indicated to Polly he wanted to talk to her outside in the hall.

Sniffling, Polly followed the old man and when the doctor had closed the bedroom door behind them, he turned to face Polly, his smile replaced by a grim expression.

“My mother…” Polly whimpered. “Is she going to be well again?”

The doctor shook his head with a frown. “I’m so sorry, my dear. I fear I can give you no hope.”

Polly forced back the tears and tried to bring some semblance of control to her voice. “What…what is Mother suffering from? She was fine yesterday, but now…” Polly’s voice crumbled into muffled sobs.

The doctor put his hand on Polly’s shoulder and she could see the deep compassion in the old man’s rheumy eyes. “It’s the worst disease in the world,” he said. “One I see quite often.”

“What is it?” Polly whispered.

The doctor sadly shook his head. "Your mother is dying from a bad case of Plot Device.”

“Yes,” the doctor nodded sagely. “I see it often. Hack writers are the usual carriers and be glad. It could have been worse.”

“Oh, yes. She could have been eaten by ogres, carried off by bandits, or simply vanished in the woods. Sadly, regardless of what form it takes, Plot Device is 100% fatal.”

Polly’s body was racked with fresh sobs. “But what happens to me?”

The doctor sighed as he gathered his thoughts. “Depends. I suspect your life is going to get far, far worse, but don’t worry. Most times it all works out in the end. I suspect you’ll end up marrying somebody nice and wealthy.”

From behind the close door, they heard Polly’s mother cry out. “Ferd! Ferd! I’m coming home to you, Ferd!”

The doctor winced. “Oh, heavens. This author’s more of a hack than I thought.”

The doctor rolled his eyes.

“Just kill the poor woman already!” the doctor shouted to the empty air.

From behind the door came a death rattle and then silence.

There was a loud knock on the front door.

“Open up, Miss Purity! It’s your landlord! I’ve come for the rent!”

The doctor checked his pocket watch. “Yup. Right on time. Such a hack.” The doctor put his hand on Polly’s shoulder. “I’m grateful I’m not in this story any longer. You’ll be homeless now, but just don’t lose hope.” He took his hat from the hook on the wall and put it on. “In about two hundred pages, everything will be just peaches and cream.”

Nurse Polly Purity stood over the hospital bed of her fiancé, Edward Manly, knowing he would be well. A plague of Plot Device had wiped out their entire village, but the worst had passed and Edward would live. Everything was going to be just peaches and cream.

Unless, of course, that idiot writer decided to create a sequel.
Posted by Alan Loewen at Friday, November 24, 2017 4 comments:

This afternoon at a meeting I was talking about certain legalities that nonprofits have to fulfill and, speaking a mile a minute, my mind, needing a random example of a 501(c)3, came up with the name, Mrs. McGillicuddy's Home for Unwed Cats.

The name popped out of my mouth when I was comparing the Articles of Incorporation that are practically universal across the spectrum of US-based nonprofits as compared to the By-Laws that can contain information specific to the organization.

I believe what I said in my impassioned need to communicate information was, "The Articles of Incorporation are almost universal whether the nonprofit is a church or Mrs. McGillicuddy's Home for Unwed Cats."

Oddly enough, nobody batted an eye.

Either nobody was listening or nobody is surprised anymore by whatever stream of consciousness I blurt out at random.

Nonetheless, I couldn't get the name of this odd little organization and my imagination traveled back to Victorian England...

Mrs. McGillicuddy's Home for Unwed Cats was well known in the Victorian City of Westminster coming into existence after the British government sent a military force to end the atrocities reported on the island of notorious vivisectionist Doctor Alphonse Moreau. Toward the end of his nightmarish life, Moreau worked toward creating the ultimate feline slave and thirty survivors of his experiments were taken back to England and housed by Moreau's niece in a spacious home located on Milford Lane just off the Strand.

The feline curiosities became popular with a number of wealthy Victorian families fulfilling various roles due to their superior abilities to manage household affairs and became common fixtures of Victorian London as nannies and private secretaries even being employed by members of English royalty. However, their habit of shedding notorious amounts of fur, coughing up hair balls, their insistence on using inconveniently large litter boxes, and presenting beloved owners with gifts of dead rodents did hinder their overall popularity.


(Note: I have not been able to identify the artist who created the picture of the anthropomorphic Victorian feline even after an extensive search. Any verifiable information so credit can be given would be greatly appreciated.)
Posted by Alan Loewen at Thursday, November 16, 2017 No comments:

Ayup, little ol' me is on the programming staff for World Fantasy Convention 2018 where the movers and shakers of today's fantasy market rub shoulders with the hoi polloi.

Yes, I will play a small part in guiding this great ship and directing and recommending ideas for seminars and roundtables and you're probably in awe and wonder and pondering, how did Alan Loewen get such a prestigious position? Was it because of his masterful hand at writing fantasy? His encyclopedic grasp of the genre? His incredible skills in problem solving and conflict resolution? His debonair and manly gravitas?

Nah. I just begged and cried and wailed and whimpered and groveled and rent my clothing until the Program Chair got so embarrassed she gave me a bit part.

I think I'm the coffee-runner between the programming staff and Starbucks.

Nonetheless, I'm attending World Fantasy 2018 and I shall try my very, very best not to embarrass anybody.

An individual seeking advice on how to counsel his friends came to me and I gave him six main pointers. (Note: When not writing dark fantasy or odd humor, I do pastoral counseling.) He then asked for a sample transcript illuminating the six principles.

(sigh) Never, ever give me a chance to write. It doesn’t turn out well for anybody. Here is the transcript I really, really wanted to give him:

Well, Ms. Thibodeaux, I’m delighted to see you. How can I help you today?

That’s quite all right. Many people who come to see me feel uncomfortable at first, but I assure you there is nothing you say that I have not heard before and company policy states all conversations with me are kept strictly private within the boundaries of the law. What seems to be on your mind?

Well… well, I might as well just come out and say it. I think I’m a werewolf.

Well, Blanche… may I call you Blanche? ... I agree that is a legitimate concern. Tell me what makes you suspect you have a problem with lycanthropy?

(sighs) Well, when I go to bed during the nights of the full moon, I wake up sorta weird.

Well… my pajamas are all ripped up and wood surfaces in my house are clawed up and… well after the last full moon my beloved Piffles went missing.

So sorry… please go on.

And then I hacked up a hairball.


And it was the same color as Piffles

So sorry. Here’s a Kleenex. Keep the box.

And there are other situations. On my days off I like to curl up on the floor where the sunlight hits me and I’ve become really picky at what foods I like and I’ve got this overpowering urge for fish and I like to rub my cheeks on people and inanimate objects…

I understand, but let me ask…are you sure you’re dealing with being a werewolf?

What else could it be?

Let’s review the symptoms: clawed furniture, picky appetite, yet still preferring fish, curling up in sunlight…and I suspect you want to have people gently rub your ears yet at the same time you're fighting the impulse to bite them. Does that sound like a werewolf?

You mean I’m some type of werecat?

Well, there is an acid test.

(A half hour later)

Yes, you almost did. Maybe at our next session you’ll be more successful. Let me buzz my secretary for your next appointment.

Miss Plushbottom, please schedule Blanche Thibodeaux for her next session.

Blanche, it was a pleasure working with you. My secretary will schedule your next appointment.

Thank you so much! You’ve been a great help and comfort.

Anytime and please stop circling between my legs.
Posted by Alan Loewen at Thursday, November 09, 2017 2 comments: