I'm All Over the Internet! (And Update)

Please come and visit me in my many cyberspace abodes:

I've been way too silent for far too long and I regret that I have not been using that time for writing. Though I would love to write full time, the reality is I make such little money in writing, I have to work full time. Currently, life and vocational responsibilities are demanding my full attention.

Don't give up on me as I hope to have a lot more good news in the future as I complete The Shrine War and then move on to other projects just as fascinating.
Posted by Alan Loewen at Saturday, June 30, 2018 No comments:

Christian Horror: On the Compatibility of a Biblical Worldview and the Horror Genre: A Review 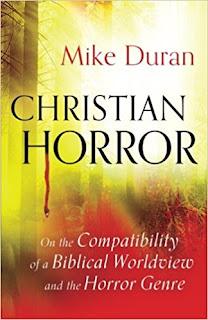 Author Mike Duran is not one to shy away from exploring controversy. As an avid reader of his Facebook posts, Mike also has his own blog and he is well equipped to address the issues closest to his heart. Yesterday, I completed one of Mike’s rare nonfiction books, Christian Horror: On the Compatibility of a Biblical Worldview and the Horror Genre, a lengthy analysis of a genre rejected off-hand by most Christians as being a legitimate expression of artistic creativity. Nonetheless, there is a growing cadre of Christian authors who are tackling horror in its many forms including myself and the book was a breath of fresh air compared to the criticism so often leveled at people of faith who read or write in the horror field.

Mike’s five chapters cover a number of topics starting with religious themes within horror as well as horror themes within religion. Jumping to an exploration of evangelical Christian culture and its relationship to literary and cinematic horror, Mike ends his book with an apologetic explaining his definition of Christian horror and then tackles in the final chapter several popular objections to what some consider the oxymoron: Christian horror. Along the way, he explores the work and philosophies of Stephen King, H. P. Lovecraft, Arthur Machen, Dean Koontz, and others like Ted Dekker and Frank Peretti.

The result is a satisfying apologetic for those of us who write in the horror genre, but also written with a maturity to understand that there are pitfalls and dangers for the Christian artist regardless of their chosen field.
Posted by Alan Loewen at Thursday, June 07, 2018 1 comment:

The Big Grey Man of Ben MacDhui: Myth or Monster: A Review 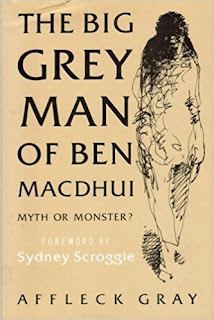 First published in 1970 and then republished with a new Foreward in 1989, Affleck Gray’s The Big Grey Man of Ben MacDhui: Myth or Monster is an exploration of the supposed entity that haunts Scotland’s second highest peak in the Cairngorms, a mountain range in the eastern Highlands of Scotland.

The late Affleck Gray is certainly qualified to discuss the subject. A mountaineer, a historian, an author, and a former forester and landscape consultant, Gray was born in the shadows of the mountain range and has wandered its crags and ridges starting when he was twelve years of age.

Starting his book with an encounter with the Big Grey Man of Ben MacDhui by Professor Norman Collie in 1891, we are asked if the entity is a real creature, a ghost, or the result of the human mind overstressed from exertion, high altitude, and solitude interpreting natural phenomenon as a visit from some guardian of the Scottish highlands.

Examining report after report of supernatural encounters with the entity, sometimes seen, sometimes only heard, the reader is taken on a tour of the lonely peaks and introduced to the typography and wildlife of the Cairngorm range. Odd natural phenomena such as optical illusions are explored and Gray leaves no stone unturned in his quest for answers, even exploring the theories of those who try to interpret the Big Grey Man as a member of fairie or even an extraterrestrial visitor.

In the end, Gray reveals his own thoughts that the encounters are merely misinterpretations of natural occurrences, but the experiences he relates from other climbers make one wonder if there may actually be something else roaming the slopes and peak of Ben MacDhui.

In spite of Gray’s more materialistic explanation, too many climbers, too many witnesses leave the reader wondering just how much Affleck Gray’s skepticism may be based more on his lack of an encounter with the Big Grey Man than the numerous eye witness reports. It’s left up to the reader to make his or her own decision.
Posted by Alan Loewen at Thursday, June 07, 2018 No comments:

In Search of the Creators to Be Published

Hello again. I am happy to say that your story, "In Search of the Creators", has been selected to appear in Exploring New Places, to be published by FurPlanet Productions in time to go on sale at the Anthrocon 2018 convention in Pittsburgh on July 5-8. It will be on sale through the FurPlanet online catalogue, on Amazon, and other places after that.

Totally delighted. Thank you for the good news. I wish you success on the anthology. As always, it's a pleasure to be part of the team.

This will be the third or fourth anthology edited by Fred Patten I have had the pleasure of being part of. It is always an honor.
Posted by Alan Loewen at Friday, June 01, 2018 1 comment:

Email ThisBlogThis!Share to TwitterShare to FacebookShare to Pinterest
Labels: In Search of the Creators
Newer Posts Older Posts Home
Subscribe to: Posts (Atom)