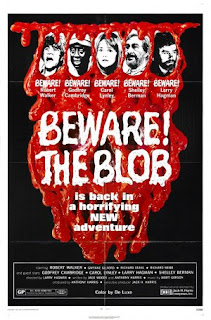 Last night, my son, Christopher,​ and I watched one of the saddest horror films ever put on the screen. Beware the Blob (1972) was directed by Larry Hagman (yes, THAT Larry Hagman) and the acting and storyline were hilariously awful.

I had watched this film years ago, but did not remember the B-actor lineup: Robert Walker, Jr. (better known for his role playing Charlie X in the original Star Trek), Godfrey Cambridge, Carol Lynley, Dick Van Patten, Cindy Williams (Laverne & Shirley) and others.

But for me, here was the killer. Larry Norman and Randy Stonehill had bit parts in the film. If you don't know them, they were movers and shakers in the early Contemporary Christian Music (CCM) movement. When I saw Norman (whom I met personally in 1983), I told Christopher, "That's Larry Norman!" A little research and, yes, Norman and Stonehill (they were best friends at this time) somehow got in this film. I wonder if they ever winced at the memory of this little gem in their legacy.

Stonehill played a pot-smoking guitar hippie and Cindy Williams was his girlfriend. They both got blobbed.

This movie was so awful and so poorly written, the Blob was the most intelligent character in the whole flick.

Here's a little bit of trivia. There is a scene around the 47 minute mark where three hobos in a barn are getting drunk together. In order, they are Del Close (with the patch over his eye), Larry Hagman himself, and the great Burgess Meredith (who must have owed Hagman a huge favor).

Years ago, Del Close wrote about his adventures on the set of Beware the Blob in an illustrated memoir he wrote for Wasteland, a DC horror comic published in the '90s. Close revealed his eyepatch was not just a part of his costume. He had sustained a serious eye injury and in the whole scene was in incredible pain. Even more interesting is that Close went on to play the role of Rev. Meeker in the 1988 version of The Blob and in his bio stated he did so because he wanted to express his contempt of the Christian clergy. I wonder if he bumped into Norman and Stonehill during the filming as both of them were nothing like Christian clergy.

If you would like to watch this charming little piece of cinematic history, you can watch it for free here. Don't worry about gore or harsh language. There isn't any. The one scene of Cambridge being engulfed is so cheesy, it's actually laughable.
Posted by Alan Loewen at Friday, June 19, 2015