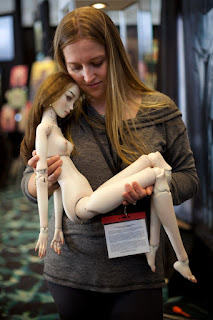 Some years ago I began my most ambitious work, a braided novel that told a story of an ancient blood line that could bring life to golems. Instead of crude wooden puppets, the most recent generation was able to bring ball-jointed dolls to life, but conflict split the group into two factions and their dolls and their masters now battle unseen across our world.

The first part, In the Father's Image, first appeared in a special issue of Ethereal Tales magazine in 2014 and appears in my collection, Come Into My Cellar, Darker Tales From A Cerebral Vaunt.

The second chapter, Rowan Dreaming, has never been published anywhere except in my collection bearing the same name.

The fourth and final segment, Dollmaker, was first published in the March 2009 issue of Aiofe's Kiss and has never appeared anywhere else.

What follows is the prologue to Doll Wars, the third and largest segment of the work where the characters in the first two stories all come together to learn about their strange power to bring life to inanimate dolls and find themselves embroiled against their will in a conflict that is centuries old.

“Ciao!” Carlo called as his friend ran off. Carlo turned to run back down the street toward his home. With the setting sun at his back, Carlo laughed with delight as he raced his lengthening shadow on the cobblestones. He deftly avoided the lamplighters as they began their evening duties and dodged the horse-drawn carts and carriages that clattered through the streets.

Leaping onto the porch at his house, he opened the front door and paused to catch his breath. “Mama! Papa! I’m home!”

Only the echo of an empty house greeted him. “Mama? Papa?” Carlo closed the door behind him.

A sudden loud noise from the basement made him jump.

His father, Domenico Lorenzini, had forbidden his family to ever enter the basement and dutifully, Carlo and his mother acceded to his wishes.

Once a week, Aldo De Luca, his father’s cousin, would pay the family a visit and after tousling Carlo’s hair, would join Domenico in the basement and stay until well after Carlo’s bedtime. Carlo thought the world of Aldo De Luca and called him Zio Aldo, Uncle Aldo.

But now, Carlo paused in front of the basement door listening to the sounds of scuffling and cursing, muffled by distance.

“Aldo!” he heard his father shout. “It’s heading toward you! No! No! The stairs! The stairs!”

Frozen in surprise, Carlo heard feet ascend the stairs behind the door. The doorknob rattled, turned, and the door flung open.

Carlo could only stare at what stood before him. A tiny figure, no taller than his waist stood framed in the doorway, the garish light of a lamp below making the creature stand out in silhouette.

It bore the shape of a human, a clumsy caricature of a small boy but one made out of wood, a crude face chiseled onto a rough, splintered ball of pine with stiff limbs ending in mismatched digits. Behind it, Carlo’s father and Aldo De Luca raced up the stairs in hot pursuit.

With a hiss, the creature lunged at Carlo, knocking him onto his back. Splintery fingers clawed at his chest and face.

“Carlo!” he heard his father cry, “My son!” Carlo’s father tripped over the top step and went sprawling, hands reaching for his only child.

But it was Zio Aldo who reached Carlo first. Grabbing the misshapen creature by the back of its neck, he pulled the hissing thing off of the screaming child and hurled it back down the basement stairs followed by the sound of something shattering.

Aldo then scooped Carlo up in his arms, hugging him to his chest. “What have we done?” Aldo groaned in his ear. Aldo suddenly spun about and put Carlo into the outstretched arms of his father. “Carlo! Stay with your Papa! Take him, Domenico. Let me deal with what we have done.”

Carlo clung to his father. Together they watched Aldo shut the basement door behind him and heard his footsteps descend the stairs.

“Papa?” Carlo said through his tears. “What was that?”

“Silence, my son,” his father said. “Let me see if you are injured.”

His father’s inspection of the small scratches on Carlo’s face was interrupted by a short squeal from downstairs making them both jump. Minutes later, the tread of heavy footsteps slowly came up the stairs. Uncle Aldo opened the basement door, his face pale.

“Papa?” Carlo said as he continued to shake from the encounter. “Papa, what was that?”

Domenico smoothed his son’s hair. “Son, listen to me,” he said quietly. “You must not tell anyone what you saw tonight. We could get into trouble, very serious trouble. You must forget what you saw and you must never tell a soul.”

Later that evening, Carlo crept from his bedroom to the top of the second-story stairs to listen to his father and Uncle Aldo as they talked in the kitchen below. His mother, his father had told him, had been gone all day tending to an ill friend.

“Surely you are going to give up this madness, Domenico,” Carlo heard Aldo say.

A pause followed. “No,” Carlo’s father said. “I got the procedure wrong. Rabbi Loew had it perfected. If he did it, then we can do it as well. The next one …”

“That thing could have killed your son! Your only son! ” Aldo hissed. “We’re fortunate that he only had scratches. And what if that thing had escaped into the streets?”

Another pause. “Aldo,” Domenico said, “I cannot give up now. You and I are blood descendants of the great rabbi of Prague and we have inherited this power as a gift. It’s in our blood. I cannot stop my research. I will continue. I just failed in the process. A flaw. I confess I don’t understand the ancient Hebrew. The manuscript is in such poor condition! I will be more careful next time. The next golem will be ...”

“Domenico,” Aldo interrupted. “We and our forebears have followed Mother Church for the last six generations. What we are doing is wrong. It is black magic.”

“And, Aldo,” Domenico continued, ignoring the interruption, “I need your help. And I know you. You are just as curious as I.”

“We are doing the Devil’s work,” Aldo muttered.

“Was the Golem of Prague the Devil’s work?” Domenico asked. “You know the legend. It protected God’s People.”

There was a longer pause. Uncle Aldo finally spoke, his voice so low, Carlo could barely hear him. “How do we make sure that we do not create something we cannot control? What if we cannot fully discover the secret?”

“We will try until we succeed.” Carlo heard the finality in his father’s voice. His father had a stubborn will. “I will make the name Lorenzini famous.” A pause. “And the name De Luca as well.”

With a shudder, Carlo crept back to his bed as the voices of his father and Uncle Aldo droned on into the night.
Posted by Alan Loewen at Thursday, December 27, 2018