I should be working on Incident in a Japanese Inn, but I'm on vacation and decided to instead write another segment of Rat Hunt.

The following is to be considered a rough draft. You can read the first excerpt here. 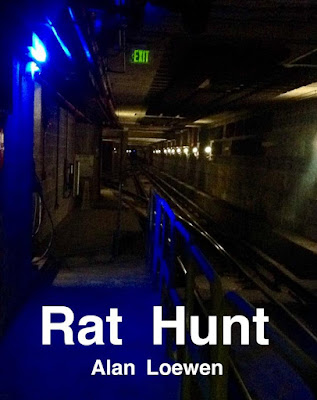 The prison bus pulled up in front of a nondescript stone house somewhere in Manhattan. Aside from the bus driver and a prison guard, Conrad sat alone, his hands cuffed. He had no idea where he was, and he had learned after three years into a lengthy prison sentence not to waste time with questions. Answers, at least the ones you needed, were seldom forthcoming.

The guard said nothing but opened the gate that separated the driver and his escort from the prisoners and motioned toward the open bus door. Conrad stood up and made his way up the narrow aisle. For a moment he considered a possible escape scenario. Conrad couldn’t help it. The thoughts had become second nature, but his hands were cuffed, and he wouldn’t be able to run any distance without being shot down in the street.

Conrad stepped down off the bus steps, and the guard took him by the arm, steering Conrad toward the door of the house.

Inside, the entryway was bare. The guard steered Conrad away from stairs that went to the second floor toward a set of double doors.

The guard knocked and opened the door without hesitation.

An elderly gray-haired woman sat at a plain table with a empty chair facing her. A large mirror adorned the one wall.

“Remove his cuffs and wait outside,” the woman said. The guard nodded, unlocked the cuffs on Conrad’s hands and stepped outside the room closing the door behind him.

“Sit,” the woman said, motioning to the chair across the table. She opened up a manila folder and studied the papers inside. “Conrad Gavin,” she read. “Currently serving the third year of a thirty-year sentence as a guest in Sing Sing. Previous employment, an enforcer for an organized crime family.”

Conrad sat and said nothing.

The woman closed the folder. “How would you like to have that sentence reduced to ten years?”

The woman sat back in her chair. “Of course, there’s a catch. You have to go through a lot of testing first to make sure you’re completely suitable to the task at hand, but you fit what we’re looking for: single, no family, military experience, a good business ethic.” She tapped the folder with her fingertips. “Even if you were working the opposite side of the law.”

“You are implying you want a job done. What’s the job?”

The woman smiled, and Conrad saw no mirth in it. “Let’s say we want you to be a security guard. An honest day’s work for room and board, a small retirement account, and you get to walk in seven years.”

“Let’s just say there’s some risk involved. You in?”

Again Conrad paused deliberately showing no emotion on his face.

“We would never ask you to kill another human being,” the woman said.

“Then seeing that in thirty years I’m in my 60s with a good chunk of my life gone, I’ll take your offer.”

The woman nodded. “Smart move. We start the testing right away.”

The next three days consisted of lots of psychological tests. Conrad had his own personal room where his meals were served. The door was locked at night.

The doctors spoke to Conrad with no emotion, performing their tests impassively as if they were robots.

On the morning of the fourth day, Conrad was led back to the room where he had first met the woman. A doctor sat there with a blanket covered box at his feet.

Reaching down, the doctor put the cage on the table and removed the blanket. Inside the cage, a large gray rat hissed and growled.

The doctor observed Conrad carefully. “Ever seen a rat before?” he asked.

Conrad laughed. “I’ve lived in New York all my life. Rats are the only wildlife the city has. Well ... rats and pigeons.”

Conrad shrugged. “A couple. Ones that got in my house.”

The doctor nodded. “Are you afraid of rats?’

Conrad shook his head. “No rat has threatened my life so many times I’ve lost count. No rat has ever told me in detail what they were going to do with my body after they had killed me.” He gestured toward the cage and its occupant. “This little guy is no threat to me.”

“But if it attacked you?”

The doctor opened up his suit jacket and took out a small electronic tablet. He tapped on the screen and then held it out to Conrad. “What about this rat?”

Conrad watched the video that had already begun playing. He felt a growing wave of horror.

The video showed a man in a doctor’s lab coat standing over a large table dissecting a body. The body was a huge rat, quite dead, longer than the table, it’s misshapen, clawed feet hung over the end of the table.

In the video, the doctor pried open the creature’s jaws to reveal its front incisors, a good two or three inches long. The doctor then lifted a brown-furred paw for the camera showing three-inch long claws at the end of each finger. The doctor waved to his right. The camera panned over to show another one of the rat corpses placed in a standing position. The monster stood on two feet and towered over the man in the video.

“What is this?” Conrad whispered.

“That,” the doctor said, “is Rattus erectus. Hundreds, most likely thousands, of them live under New York. They attack in swarms. We want you to join a group of select people who wage war against these monsters and keep them underground.”

Conrad stared at the doctor in silence.

“Take a day to think about it,” the doctor said. “If you agree you’ll discover we have some interesting tools at your disposal. If you say no, you go back to your prison cell. We know you won’t be telling anybody about this. You have neither friends or family to talk to anyway. And if you did say something, nobody would believe you.”