Molly's Christmas: A Story For Children 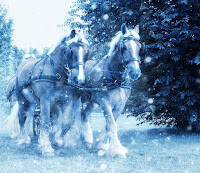 This is a Christmas story written specifically for children. If you are an illustrator and would like to partner with me on a children's book, please contact me at magic.by.alan AT gmail DOT com.

Molly's Christmas
by Craig A. Loewen

"But I don't want to stay in bed," Molly cried, "I want to come down and decorate the Christmas tree. And Uncle Ted was going to come by with his horses and sleigh!"

"I'm so sorry, sweetheart," her mother said with a shake of her head, "but you've got a very bad cold and a fever. Most likely it's flu. If you don't rest; it might get worse." She grabbed the blanket and pulled it up over her shivering daughter. "There's still a lot of Christmas to go around. December's a busy month. There's a lot to celebrate and there's always New Year's."

Her mother rested a cool hand on Molly's forehead. "I know you and horses," she said with a gentle smile. "You'd rather be with horses than eat, but I promise you'll have plenty of time for Christmas and your Uncle Ted's sleigh team."

She sat by Molly's bedside until her daughter's breathing became soft and rhythmic. Then giving her a quick kiss and a prayer for sweet dreams, Molly's mother left, quietly closing the bedroom door behind her.

In Molly's room, all was silent except for the little girl's breathing. Through the window in the clear December night, the stars twinkled in a perfectly cloudless sky.

Molly surrendered to the dreams of a magical Christmas night.

"Oh, you poor thing," she heard as the mists of sleep started to fade around her.

"Why you are, you poor child, sick on Christmas Eve. How unfair."

Molly blinked. She found herself standing in a small room made cozy by a warm glowing fireplace. In front of her, an old woman dressed in red and white rocked back and forth in a small chair.

"Who are you?" Molly asked.

"Well," the woman said with a big smile, "some say I'm the Spirit of Christmas, but my friends just call me Mother Yule. Now let's see if we can't make your Christmas a tad more cheery."

With that, Mother Yule clapped her hands and suddenly Molly found herself out in a cold, stormy winter night. She shut her eyes tight against the bitter sleet. "This isn't what I would call cheery!" she called out to the wind.

"Now, now," said Mother Yule's voice in Molly's ear. "Be brave. I want to introduce you to a friend of mine."

Molly blinked in surprise as she realized they were not alone. A huge, jet-black warhorse stood before her on strong, sturdy legs. The sleet hit the stallion's muscular back and instantly melted from sheer body heat. Molly could feel the power resting in the animal.

Molly heard boots crunching through the snow behind her.

"Molly," Mother Yule's voice said, "I would like you to meet one of my dearest friends, King Wenceslas, the Duke of Bohemia in the Year of our Lord, 926. I'm sorry I can't give you a proper introduction, but he cannot see you."

The young man dressed in a thick, heavy cloak could not have been older than nineteen. He dropped a huge bag on the ground and rubbed the horse's ears in greeting. "Pr'tel, my friend," he said. "I know it's cold, but we have good work to do."

Flinging the heavy sack over Pr'tel's back, he took the bridle and led the way out of the paddock and into the dark streets of a city asleep in the grip of winter. It surprised Molly, clothed only in a nightgown, that the cold did not really bother her.

Interested, she kept up a steady pace behind the pair, the horse's heavy iron shoes making a clip-clopping echo through the deserted streets.

They came to a simple home. Wenceslas clutched his cloak tightly around him and pulled the hood low over his face. He rapped on the door, paused, and rapped again.

A noise came from behind the door. Slowly, it opened a crack to reveal a tired woman holding a single candle burned down to a nubbin.

"Yes?" the woman asked trembling. "Who are you? What do you want?"

"A friend," was all he would say. He went to Pr'tel and took the heavy sack from off his back. "Here is food for you and your four children. Here also is cloth for you to make clothes for your children or maybe to sell. "And," he said, reaching to the small leather bag on his belt, "here are a few coins to help."

The woman simply stared at the sack at her feet, her mouth open in surprise. "But," she said as tears came to her eyes, "Why? Why would you do this for us?"

Wenceslas laughed gently. "Is it not the season for giving gifts?" Without another word, he leaped onto his horse's back and turned his head away from the widow's door.

"Bless you, sir," the woman called to him as he rode away. "God bless you!"

"He already has," Wenceslas called back.

Suddenly, Molly found herself back in the warm room where Mother Yule sat in the cheery glow of the fire. "What did you think of that, little one?" she asked.

"Oh, that was fun," Molly said excitedly. "Do you have other friends like that?"

Mother Yule laughed in sheer delight. "Oh, yes. Look! All that we behold is full of blessings!"

With a wave of her hand, she sent Molly to the horses and ponies of history as they participated in the spirit of Christmas.

Molly watched Saint Nicholas of Myra astride his faithful mare as he went to give a poor man gold for his daughters' dowries. She stood on board a ship bound for a new land listening to the immigrants sing Christmas carols to calm their stabled horses on the undulating sea. She watched ponies and draft horses drag Christmas trees from the woods and pull sleds of Christmas revelers. Up and down the corridor of time, Molly had the privilege of seeing Christmas through countless equine eyes.

Back home, Molly's mother looked in on her daughter only to hear Molly laugh contentedly in her sleep.

"One more, dear child." Mother Yule whispered in her ear. "One more."

Molly found herself staring at a strange face of a lumpy, dirty creature standing next to a wooden water trough.

"A donkey!" she said in exasperation. "Oh, Mother Yule, that's not a horse!"

"Hush," said the voice in her ear.

The donkey stood in a strange, dusty place filled with animals. The walls were simple clay and mud. The floor was covered with a thick bedding of straw. A ramshackle door creaked open.

"Best I can do," came a tired man's voice. "The inn is full, but you can stay here in the stable. At least it will be warm."

"It will have to do," said another male voice. A man appeared in the door silhouetted by the bright sunlight. He led a young woman by the arm. The woman was obviously with child and in pain.

That night, Molly watched as the drama of the first Christmas unfolded before her eyes. Even later, sitting by the donkey as it lay on the hay floor keeping the stable warm with heat from its own body, Molly watched with wonder as shepherds knelt before the couple and their newborn child. From where she sat in the straw, Molly could see the smooth unmarked hands of the cooing baby reach out to a brilliant star in the heavens glittering through an open window.

The next morning Molly awoke and shook her head at the memory of her fantastic dream. She still felt a little shaky, but her fever had broken in the night. The door opened and her mother entered with a breakfast tray.

"Good morning, Molly!" she said. "Merry Christmas! Are you feeling up to going downstairs and ..." Her mother stopped in mid-sentence and looked at her with a puzzled expression."Why, Molly," she said in surprised exasperation. "How did you come to be covered in straw?"
Posted by Alan Loewen at Wednesday, December 16, 2015