Elysia House: A Free Offering for All Hallows

Guaranteed to be an exercise in futility, I am going to attempt to write a story for my faithful readers for All Hallowed Eve. I will announce when the story is completed and available for reading. Let us begin: 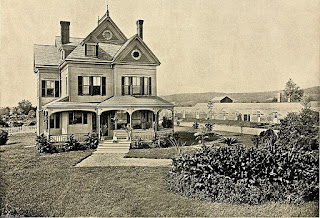 by Alan Loewen
ALL RIGHTS RESERVED

I cannot say I own Elysia House. Better to say she owns me. Laugh if you wish. It doesn’t change the truth that Elysia is alive—self-aware—responsive to those who walk within her walls and live in her rooms. Over the years of my residence, I have come to find a rest here as well as a calling, for Elysia has her secrets and I plumb her endless mysteries while haunting her halls as a willing revenant.

Hanna Spiegel turned her car into the driveway of Elysia House with a hard jerk of the steering wheel and jolted the car to a stop with a stomp on the brakes. Feeling the first twinges of foreboding, Hanna stared out the windows of her car at the mansion that killed her husband fourteen years ago.

Elysia House stood before her, its windows glistening in the early morning sun. Steam curled lazily off the damp slate roofs as the night's heavy due evaporated in the sunlight.

Old Lady Spiegel—it’s what the townspeople called her behind her back—opened the car door and stepped out. She bore the name proudly; after all, it described her perfectly.

She had not been back to the house for fourteen years since that day her beloved Raoul died. Elysia House had killed him just as callously as a cat would kill a mouse. Raoul—foolish, handsome Raoul—had purchased the house for his new bride ignoring its history as being a place known for stories of lights shining from darkened windows and sounds and echoes that filled the rooms. They cared nothing for the talk of the townspeople about the house or themselves. Raoul and Hanna had both just celebrated their sixtieth birthdays within a month of each other, but you paid love its due regardless of the decade it found you. Let the fools laugh.

Hanna became a widow exactly fourteen days after their marriage and their taking residence of Elysia House. Oh, how the townspeople talked then.

In her grief and fury, Hanna decided to punish the house the only way she knew. She locked the doors and bolted the windows and walked away She would kill the house, by letting it die of old age and neglect.

For fourteen years, not one workman, carpenter, or plumber had been inside the house. The townsfolk talked and gossiped about what a shame it was to see the old Elysia House fall into ruin, but Hanna rejoiced at every piece of slate that fell, every sliver of paint that cracked and chipped, and every board that showed signs of decay. Elysia House stood dying and Hanna exulted at its slow and painful demise.

Yet, something had now foiled her revenge. The tax collector did not care about the social strength of the Spiegel name and two days ago, a sheriff's sale took Elysia House out of Hanna’s grasp.

When one of the townspeople told her that somebody had actually dared to bid on the property, she went into a rage. When they then told her the new owner actually had the audacity to say Elysia House would be made into a bed and breakfast, her rage turned cold. Very cold indeed.

Hanna didn't care a whit about sheriffs or their sales. Elysia House belonged to her and Hanna stood determined to be the one to remove it from this world.

Somebody had mowed the lawn, even to removing the young locust trees that had sprung up in the absence of a caretaker. The silver maples that dotted the front lawn had already been trimmed.

Hanna made her way across the front porch, its wood and paint showing signs of advanced disrepair, to discover her key still worked.

She pushed the door open and stared into a hallway she had not seen in fourteen years. To her, the sickly-sweet odor of stale air smelled like a pleasant perfume. Hanna had tasted this odor before, the smell of the dying that even a pristine clean hospital could not remove from a person who breathed their last. She grinned. Elysia House breathed its last and since the sheriff had forced her hand, Hanna decided to speed up the process.

She did not want to enter the house any further than from the front door. Her business here would be over quickly.

Hanna went to the car and opened the rear boot. She put a road flare into the pocket of her coat and pulled out two five-gallon containers of kerosene. Ignoring the heavy load and the shortness of breath caused by the unusual exercise, Hanna walked back into the front hallway and set them on the floor.

Catching her breath, she looked back out into the fresh Pennsylvania air and she felt her heart catch in her throat. Walking up the driveway, accompanied by a small dog, Father Williams, the local Episcopal pastor had seen her and waved. A neighbor to Elysia House, he must have seen her car from the road while out on a morning walk. Though neither she nor Ronald had been church people, Father Williams had done a passable job at her husband’s funeral. And now, walking up the driveway, he certainly would foil her ultimate revenge.

She shut the door and locked it. Picking up the kerosene, she walked deeper into the mansion.

Without thinking, she went into the library where she had found her husband those many years ago. She gritted her teeth as memory returned, the morning she found her husband sitting at his desk, his dead eyes staring at the picture window, a look of shock on his face.

The library stood empty now. Hanna had sold off the furniture and books years ago. She sat the kerosene on the floor and unscrewed the caps.

There was a knock on the front door.

Panicking, Hanna took the road flare and suddenly realized she had no idea on how to use it. With a cry of frustration, she turned it over in her hands until she saw the instructions, barely legible in the red wax coating.

Straining to read by the sunlight that came in through the library window, she blinked when the room suddenly went dark as if somebody had turned the sunlight off with an electric switch.

She looked up to see what had blocked the light. The road flare dropped from her fingers onto the floor and Hanna suddenly understood what had killed her husband so many years ago.

The pain blossoming in her chest shot out her extremities and the darkness in the windows grew darker yet.

The coroner said Hanna was dead before she ever hit the floor.

(Illustrative picture is in the public domain.)
Posted by Alan Loewen at Sunday, September 23, 2018