Lair of the White Rabbit (Vignettes) 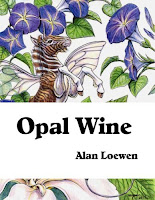 I wrote this many, many years ago and though meant for a restricted audience, I put it into my short story collection, Opal Wine where it received a home. Filled with private jokes, it shows my absolute adoration for the Alice in Wonderland stories.

However, little did I know how prophetic my little tale would become.

Caveat emptor. Beware the White Rabbit. There is danger here for those who believe they are naught but chameleons in flux.

“This is all Ken’s fault.” - Alan Loewen

The book, her sister had informed her, was very grown up and was all about something called feminism. Alice had no idea what a feminism was except it didn’t like men, dresses, or playing with dolls.

Alice had no interest in men except her father who overshadowed her eight-year-old world, but she did have a guilty affection for dresses and a genuine passion for dolls.

She wondered if it might be possible to slip away from her sister and return to the house where her dolls waited for her, but the heat of the day and the droning of her sister reading to herself made her so very drowsy that she scarcely noticed the white rabbit walking by.

There was nothing so very remarkable in that; nor did Alice think it so very much out of the way to see that the Rabbit walked on two hind legs and wore an ankle-length dress of some red shiny material but when the Rabbit actually put a cigarette holder to its lips and languidly drew on the mouthpiece, Alice started to her feet, for it flashed across her mind that she had never before seen a rabbit with a cigarette holder, let alone smoking a cigarette. Burning with curiosity, she ran across the field after it and fortunately was just in time to see it pop down a large rabbit-hole under the hedge.

Alice found herself growing weary wandering through the wood and dealing with its weird occupants. If she had known that chasing a white rabbit in an evening gown could have caused so much trouble, she probably would have stayed with her sister.

A few moments later, the wood ended and Alice was delighted to see she had entered a beautiful English garden. The heady aroma of the peonies and the hollyhocks served a delightful replacement for the woodsy smell of the forest and, still stinging from her fresh encounter with the Apple Twitcher, Alice did not even bat an eyelash when she came across a Sheep sitting at a small table with a cup of tea before her and a book in her hands.

The Sheep looked up and, seeing Alice, gave a friendly if somewhat vacant smile. Alice noticed at that point the Sheep was holding her book upside down.

If it’s like sheep at home, Alice thought, it’s probably is a little slow. I must be polite.

“Well,” the Sheep bleated, putting down its book. “A visitor. A visitor with news of the world outside. Please come and sit down. Care for refreshment?”

Alice curtsied and took the seat across from the Sheep. “Good evening, ma’am, I was wondering ... “ she began.

“Now, now,” the ewe said, “let’s not get into naming things. It may be evening, it may be morning. Who cares about names?”

“Now for me,” the Sheep said without hesitation, “I don’t care if I’m eating breakfast, brunch or lunch. The adventure, the quest, the life is in the eating.” And with that, she daintily picked up a swath of grass that had been lying on the plate and tossed it into her mouth.

“Now there you go again. Naming things. Why should you restrict me to one specific gender? I might want to be a ram today.”

Alice paused for a moment in thought. “But isn’t a person what a person is?”

“Oh, horrors, no!” the Sheep replied. “What’s the freedom in that? Tell me, what is your name today?”

“Well, my name has always been Alice.”

The Sheep rolled her eyes in obvious dismay. “So sad. Just think of how many other people you could be. Now, I like to change my name every hour. Right now, I feel like a Mary.”

“But isn’t that confusing?” Alice asked.

The Sheep laughed. “Not at all. Remember that freedom is all that is important. Why make everything so certain? When you give something a specific name the adventure to discover its essence is over. If you never name anything, you’ll never come to the end of your exploration. It would be like coming to the end of a journey.”

Alice was becoming a little weary of the strange comments of the Sheep and her head was starting to ache. “But all journeys have to end sometime,” she said. “When I go on vacation at the shore with my family, I want to get there sometime.”

“Poor, poor child,” the Sheep said. “It’s the journey, not the destination we live for. Why restrict yourself with names and journeys ending?”

Alice thought for a moment and though she knew the Sheep was wrong, she felt confused and unable to respond the way she wanted.

“I will have to ask the White Rabbit when I find her,” she said, thinking aloud,

The Sheep gasped and Alice saw a look of absolute terror on the ewe’s vacant face.

“Oh, no!” the creature whispered, its eyes darting nervously back and forth. “Stay away from the White Rabbit. Have nothing to do with her. Nothing. She‘s a bad ‘un she is.”

Her curiosity getting the better of her, Alice leaned forward. “Why?”

The Sheep leaned forward until her mouth brushed against Alice’s ear.

“Because,” the frightened ewe whispered, terror making her voice quiver, “because she’ll tell you who you are.”

“And there,“ Brigit said using her benga holder as a pointer, “is the only mystery here in my domain that I don’t understand.” The white rabbit put the white pearl holder to her lips and drew in a long, slow breath, letting the smoke dribble out her two front teeth and lazily ascend past her expressive eyes and her long pink ears.

Alice looked across the meadow where a creature with a woman’s body and a unicorn's head sat leaning against a huge oak tree. Lying on the ground next to her, lay another human figure with its head in the unicorn’s lap.

As they drew closer to the pair, Alice realized that the unicorn was asleep, a look of deep contentment on its face. The other creature was a human, a knight lying on his back, his armor battered beyond all comprehension. His mild face cradled by dark curly hair, smiled contentedly as it lay in the soft fabric that made up the unicorn’s dress.

Alice rubbed her eyes and stared at them in puzzlement: the look on their faces mirrored the other exactly.

“They have been here as long as I remember,” Brigit said in explanation. “In that same position, never changing.” She paused a moment as in thought while she took another puff of her benga. “The legend here is that they are dreaming and that it would not bode well for us here if they were to awaken.”

“Why? Alice asked. “Are they dangerous?”

“Oh, no,” Brigit said with a smile. “It’s believed that one of them is a dreamer. For them to wake up means that all of this,” she gracefully waved her benga holder around her in a circle, “would simply disappear in a puff of reality.”

“So which one is the dreamer?” Alice asked.

“Ah,” Brigit said with a nod. “There lies the mystery.”