What follows is the prologue of an old WIP. I touch on Greengate and its locale in a number of my stories. Enjoy.

PROLOGUE TO GREENGATE
ALL RIGHTS RESERVED 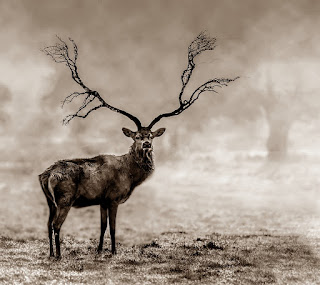 Greengate haunts me still in memory and dream.

I was five years old playing in the backyard as my mother watched me through the kitchen window.

Our house was one of ten clustered around the crossroads that we shared with a general store and an old stone church. To the north and east sprawled the gently sloping hills of Pennsylvania, endless orchards of apples and peaches and cherries. Cows grazed in the fields where limestone boulders jutted through the earth like giant broken teeth. To the south and west, the grassy knolls turned into woods of oak and maple that crept up the sides of large steep hills. The range stood to the east, running north and south as far the eye could see. Named South Mountain; it's stream-carved valleys, runs, and roads bore such imaginative names as Dead Woman's Hollow, the Devil's Racecourse, the Black Andes and Horsekiller Road.

Engrossed in my play under the shade of the old oak, I ran my Tonka trucks over the tree roots that broke through the surface when I looked up and saw the face.

It was a man's face created out of the leaves and branches of the oak, and it looked down at me without any emotion in its green eyes. With it came the overpowering realization that I was not watching it as much as it was watching me.

I blinked my eyes and rubbed them to make the illusion go away. I thought it merely a trick of sunlight among the branches. I looked up again, and the face was still there. I felt a gentle breeze at my back, and the eyes blinked as the leaves gently swayed.

More puzzled than scared, I turned to look at the house where my mother's head stood framed in the window as she bent over her dishes. I looked back at the face, and I looked up at nothing but leaves, branches, and bright sunlight where nothing looked back.

It is one of the clearest memories of my childhood in Greengate.

Years later, Peter Mackey and I sat on a limestone boulder near the base of South Mountain, sharing penny candy we had bought at Echon's General Store. Peter and I were ten, and we talked about topics such as baseball, our fourth-grade teacher who had paddled Keith Bream in front of the whole class, and the new Johnny Quest cartoon show on television.

The light dimmed as the sun sank below the Blue Mountain range to the west, its shadow slowly spreading across Greengate.

Our conversation suddenly stopped when out of the small patch of woods to our right came a stag.

The woods around Greengate and South Mountain are home to white-tailed deer, and they were a common sight in the fields and orchards, but this was like no deer that Peter and I had ever seen. At least seven feet at the shoulder, Its beauty filled our hearts with joy and awe.

Our mouths open, not speaking, we stared goggle-eyed at the creature. It walked right by the rock where we sat as if we were invisible. Maybe we were. We watched it until it disappeared in the woods that lead up the slopes of South Mountain.

Peter and I went home and never mentioned it then or ever again.

And yet, another memory.

"This is for real, right?" I ask Ken once again. "The night before your wedding, you drag me out to an old orchard?" The clouds race against the full moon while Ken Wright stands in rapt attention, searching the darker shadows of the apple trees. The night is alive with a choir of crickets accented by a chorale of fireflies.

"Do you believe in fairies?" he asks. He smiles at my look of stunned surprise. "Not the ones we see in Disney films or in the children's tales. I'm talking about the fey folk who live between reality and dreams."

I shrug my shoulders and lie. "I don't have much of an imagination."

He turns his face to the full moon which had washed him clean of color. "Years ago, I saw her. I was eight years old and wandering through the orchard, and I saw her running among the trees. Her hair was as red as autumn apples, and her clothes looked like they had been knit from autumn leaves.

"When she looked at me, her eyes were wild and dark. I think I fell in love with her then, and at night she still runs through my dreams."

I sadly shake my head. "Tonight is your last night as a bachelor. We should be at a party. We should be drinking your father’s beer, not haunting an apple orchard looking for a will-o'-the-wisp."

My friend continues as if I haven't spoken. "I've remembered her for years, and before I take those vows tomorrow and spend the rest of my life with a woman of flesh and blood, I wanted to put this final dream to rest."

I clap him on the shoulder. "It's late. You have other dreams to dream." He ignores me.

"You will want to be well-rested for tomorrow night," I smirk.

I leave him standing in the moonlight among the apple trees.

The next morning the wedding party waits nervously at the old church for the bridegroom, his beautiful bride almost in tears. Excusing myself, choking back the mounting fear, I return to the old orchard where I had left my friend the night before.

I find Ken's body half-fused into the ancient bark of an apple tree, taken in a wooden embrace.

A gentle smile is his sole expression.

The next day, I left Greengate and did not return until almost two decades later.
Posted by Alan Loewen at Thursday, December 19, 2019