Steampunk Cthulhu: Mythos Terror in the Age of Steam: A Review 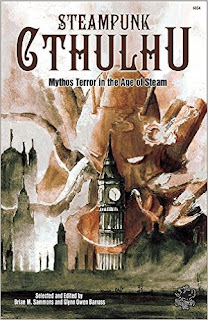 As a reader of anthologies as well as a writer who has been published in a number of them, I can say that for those whom the gods (Elder Gods?) destroy, they first make them an anthology editor. Far too many anthologies suffer from a number of ailments such as stories that do not necessarily fit the theme or are very uneven in quality, or the editor's ego gets in the way of final product.

I picked up Steampunk Cthulhu: Mythos Terror in the Age of Steam, edited by Brain M. Sammons and Glynn Owen Barass with a shrug, fully expecting the typical anthology with its typical flaws and I can say with unequivocal delight that I struck a gold mine.

The 17 stories collected here are mostly very high quality tales where the authors do the very difficult: combine the myriad aspects of the Chtulhu Mythos within the steampunk genre and make it look flawlessly easy.

Those Above by Jeffrey Thomas takes place in a world where the sky above is filled with an eldritch horror that feeds on dreams and steampunk technology appears to have come to the rescue of the hapless humans that live below. At least that is what appears to be the case.

The Blackwold Horror by Adam Bolivar tells of a folklorist traveling to England's West Country to research its tales and legends and spends a frightful night with the host and staff of Blackwold Abbey.

No Hand to Turn the Key by Carrie Cuinn tells the tale of an alternate future where humanity has been wiped out by Mythos horrors leaving only automatons behind to defend what remains of Earth's human legacy. The result is a touching tale of sacrifice and hope in the face of overwhelming odds.

The Reverend Mr. Goodworks & the Yeggs of Yig by Edward M. Erdelac is the story of a traveling preacher who is more steam-powered automaton than human as he seeks to rid the American Old West of a cult that has taken root in the town of New Valusia, a cult bent on world domination.

Carnacki – The Island of Doctor Munroe  revisits the occult world of detective Thomas Carnacki, first created by English fantasy writer, William Hope Hodgson. Other writers have expanded on Hodgson's creation, but author, William Meikle, has remained true to the Carnacki tropes while  avoiding the stale creation of a pastiche.

Pain Wears No Mask by John Goodrich is a fascinating tale of several air pirates determined to steal the Crown Jewels that are kept on board the airship of England's reigning monarch. It is a tale of greed and corruption and The King in Yellow.

Before the Least of These Stars by Lee Clark Zumpe is a beautifully crafted tale of a man trapped out of time in a world where humanity is under attack by the Old Ones from the sea.

Unfathomable by Christine Morgan is a story of an advanced steam-powered submarine with a worthy crew of sailors and scientists sailing to retrieve a meteor that has fallen in the ocean. It is something far, far worse.

The Flower by Christopher M. Geeson is a tragic retelling of the American Civil War with steampunk weapons and a historical twist that puts the tale solidly in Lovecraft's mythos.

Tentacular Spectacular by Thana Niveau is an odd and horrific tale about corsets. That's all I'm going to say.

Fall of an Empire by Glynn Owen Barrass & Brian M. Sammons is a sprawling tale starting with a female thief worthy of her own series. After her failure to achieve her objective, the story flashes ahead a few years where a Lovecraftian horror is now ruling the world through the British Empire. Unless three rebels bring its reign of horror to a close, humanity has no future remaining.

The Baying of the Hounds by Leigh Kimmel unites Thomas Edison and Nikola Tesla as they team up to bring the world back to normal after one of Tesla's experiments goes horribly wrong.

Mr Brass & the City of Devils by Josh Reynolds is the story of a Pinkerton detective who is more automaton than human and his urgent mission to stop a cult from unleashing a world of horror upon the Earth. In the tale we revisit the Mi-Go, the creature from Robert Bloch's, The Shambler from the Stars, and the ghostly reptilian race from Lovecraft's, The Nameless City.

The Source by D.L. Snell tells the tale of Corwin Carroll, an inventor of steampunk weapons for the armies of the American Revolution. However, he learns that inquisitiveness and the drive to invent without thinking out the repercussions has a price.

Happy Birthday, Dear Cthulhu by Robert Neilson is a story of another weapons manufacturer who discovers that Mythos horrors make great fuel for his steampunk creations. But somebody else wants his discovery for themselves and they are more than willing to kill for it.

The Strange Company by Pete Rawlik is the last story and a hodgepodge reminiscent of The League of Extraordinary Gentlemen using multiple characters across the Mythos tales.

All in all, if you like steampunk and you like tales of the Cthulhu Mythos, Sammons and Barass have done a superb job in putting this anthology together. It appears they have partnered for others with the blessing of Chaosium Press and I look forward to their future offerings.
Posted by Alan Loewen at Monday, February 08, 2016