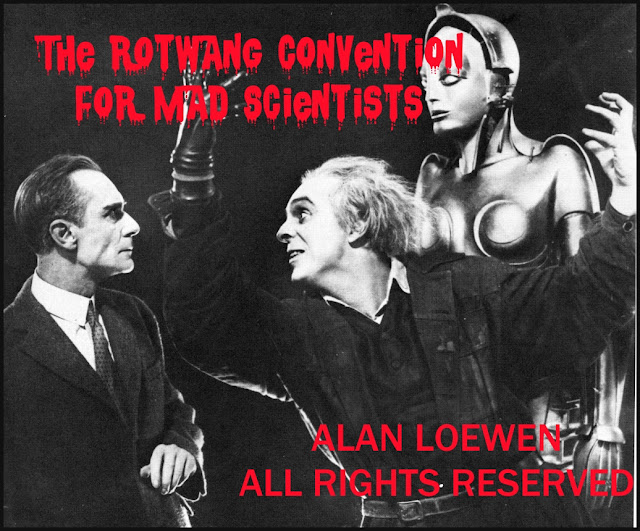 From: mad_scientist@dmail.com
Subject: Attending the Rotwang Convention for Mad Scientists
Date: May 5, 2012 9:05:42 AM EDT
To: The_Col@loc.org

My dear Colleen, I have just received the most delightful news! It appears that the events in my first foray into mad science in creating a race of sentient feline secretaries, were not in vain!

I’m delighted to report that I have received a personal invitation from the Rotwang Convention for Mad Scientists. Named after C. A. Rotwang who was made famous in Fritz Lang’s 1927 science fiction film Metropolis, the convention attracts mad scientists from around the world to compete for the famed Rotwang Award!

True fame has reared its lovely head. I shall keep you fully informed of my journey toward scientific immortality!

I arrived via steam railroad and made my way to the fin de siècle hotel where mad scientists were already gathered setting up their displays to compete for the coveted Rotwang Award. The hotel was already filled with grinning men in stained lab coats with frizzed out hair and escorted by creations and abominations of their own making.

I confess I had my own aspirations and I kept my wheeled satchel close to me with my own pet project carefully wrapped to keep it from being damaged.

After meeting my three roommates and promising we would not use each other as unwilling participants in our experiments, we went down for opening ceremonies.

There, special speaker Joseph Biden gave us an encouraging talk on how to take over a world leader with a brain transplant and it was a rousing speech filled with drama, cackling mad laughter, and screams of "And they call me MAD!"

Later we went down to for brunch where the usual verbal assaults broke out over the unending discussion of whether the ultimate goal of a mad scientist is to turn a beautiful woman into a gorilla or turn a gorilla into a beautiful woman. Personally, I avoid the entire conflict as the whole purpose of my life is simply to find new and novel ways to blow up chickens.

The Dealers' Room then opened and I snagged myself some good deals on Jacob's Ladders and some brains in old glass jars. I almost got a secretary, but as she grunted a lot, scratched at imaginary fleas, and insisted on being paid in bananas I thought it better to pass. She sure was pretty though.

Of course, I had to pass on a lot of panels to get the good deals, but through the afternoon, I attended the Does Your Assistant Have To Have A Prerequisite Hump? and Bad Monster! Bad Monster! or The Shame Of Premature Rampage.

Afterward, we all sat around playing Bridge and Cribbage because even mad scientists need to let their hair down. For those really wanting to party, I could have gone to the dance where mad scientists cavort with each others creations, but the event has a high body count.

The next morning after breakfast we discovered some mad scientist, in order to get a jump on the day's competition and impress the judges, had spiked the coffee with his Gender Bender formula.

We took the offender, fed him his own formula, and then turned him into a gorilla.

Fortunately, it all wore off which was good because belting out a mad cackle and screaming, "It's alive! It's alive! I now know what it feels like to be a god!" doesn't have the same impact when you're a pretty, blue-eyed blonde.

Then the contest started in earnest and it was the best year I have ever seen: inter-dimensional gates large enough to swallow whole cities, tentacled horrors that started out as puppies, rampaging robots with great gas mileage. It was incredible!

Then it was my turn.

With my heart in my throat, I wheeled my satchel onto the stage, opened it, and took out a chicken. Carefully placing it on the table with a handful of grain to keep it occupied, I then took out my life's work, a small pistol that looks like a toy from a local dollar store.

I took careful aim, pulled the trigger, and in a flash, the stage was covered with feathers and gore.

The crowd went wild and I could taste victory. The Rotwang was surely mine!

"Awesome," one of the judges said. "How many people can you target at once."

The auditorium went silent. "I'm sorry. It only blows up chickens."

The award went to a scientist who came up with a mutated abomination that could belch The Star Spangled Banner.

We all agreed that was certainly mad.

There was no Sunday.

The hotel accidentally double-booked our con with the Dark Mages Con and very few of us have survived to tell the tale of the scheduling disagreement.

But it was still a great convention and I'm going back next year with a bigger and better chicken!


(Title graphic is in the public domain)
Posted by Alan Loewen at Tuesday, October 18, 2016