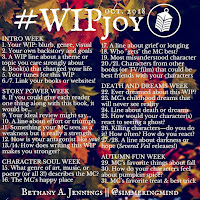 Today's challenge is to discuss my main character's happy place.

Well, as I have been saying, I really don't have a main character, but for the sake of argument, I have been using Sen, the leader of a kitsune-led Shinto shrine as my reference even though she only appears in the first section of the work.

Sen is a 10-tailed kitsune, well over 1,000 years old, and for 500 of those years, she has served at a shrine to Inari, now, in the last century, she has been the leader of the other four miko and the shrine is her home and her love.

Here is the model I used for the shrine taken from a Wikipedia article:


The following is a diagram illustrating the most important parts of a Shinto shrine. 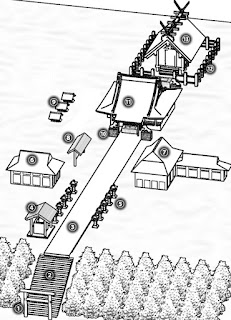 
Following the bend of the stream as it coursed its way around a hillock, Christopher stared in stunned surprise. A vermilion-colored torii, a universal feature of all Shinto shrines stood before him. Acting as a type of open gate, the tall torii served to separate the sacred inner space of the shrine from the outside mundane world. On both sides, a high wall went to the right and the left until they were lost in the trees. Oddly, no road led to the torii, though a tiled sandō, the walkway that led to the shrine’s interior, began at the entrance.

What surprised Christopher the most was the immaculate appearance of the torii, the wall, and the sandō. He had expected decaying ruins, but what he could see looked pristine.

Taking out his camera, he took a series of quick pictures and then made his way up the tiled walkway. Large, ancient trees filled the shrine grounds, but the ground stood bare of leaves, more evidence the shrine had occupants that maintained the property.

Following the path, Christopher went around another hillock and there he could see the rest of the shrine and its assorted features.

The chōzuya, the purification fountain, sat under a small bamboo shelter. Beyond the fountain, he could see the Kagura-den where miko, the shrine maidens, would hold their sacred dances. Past that, there were three setsumatsusha, small auxiliary shrines to other minor kami. The oratory, where rituals and worship took place, stood as the dominant building, its entranceway comprising two double doors. Beyond that, protected by its own wall, stood the honden, separate from the oratory, where devotees to Inari Ōkami believed the goddess herself to be enshrined. Christopher smiled with delight to see both the oratory and the hondon displayed the Sumiyoshi-zukuri style that proved the shrine had been built well before Buddhism came to Japan and made dramatic changes to Shintoism. Absent also were the tōrō, traditional Buddhist stone lanterns so common in contemporary shrines.

However, the most striking absence was the total lack of statues of Kitsune, the pure white foxes that served as Inari’s messengers. All of Inari’s shrines held two or more statues representing the creatures, many times with them holding keys within their delicate jaws. Without Kitsune statues guarding the entrance, Christopher had no assurance this was a shrine to Inari Ōkami at all.

Christopher snapped several pictures with his camera, a small part of his mind feeling guilty for taking such liberties without the shrine priest’s permission, but strangely enough, the shrine lay deserted. Though the sense of being observed had never left him, no priests, miko, or worshipers walked the grounds of the shrine. The signs displayed the presence of caretakers, yet the grounds appeared deserted.

Nonetheless, he had no desire to offend. Though no devotee of Shinto, Christopher knew that all visitors had to undergo the simple ceremonial purification rite known as temizu. The chōzuya for this shrine, where the temizu had to be performed, was a bamboo shelter that housed an actual spring that bubbled up into the fountain and overflowed into an ornate grate.

Several bamboo ladles lay ready and with practiced ease Christopher took a ladle in his right hand and used it to scoop up water from the fountain. He poured the water into his left hand, switched hands, and poured water over the right.

Taking the ladle once again in his right hand, he poured water into his left palm and used it to rinse his mouth. He rinsed his left hand a final time, tipped the ladle up to let water pour down the handle, and placed the ladle back onto its stand.

If there were any unseen witnesses to his ablutions, Christopher wanted them to know he came to the shrine respectfully.

Email ThisBlogThis!Share to TwitterShare to FacebookShare to Pinterest
Labels: #WIPJOY, The Shrine War